Chinese influence around the world continues to grow as on Aug. 11 they achieved a foothold into Europe through an acquisition of the Greek port of Piraeus.

COSCO, one of China’s largest shipping consortium’s, purchased a 51% share in the port of Piraeus as part of the Silk Road 2.0 initiative with the expectation of increasing that stake to 67% in the coming years.

China’s COSCO Shipping group has completed the acquisition of a 51 percent stake in the Greek port of Piraeus, becoming the controlling shareholder.

The company has paid $311 million for its major stake in Piraeus and plans to increase its share to 67 percent over the next five years. COSCO thus takes over Piraeus’ management and operation.

“The Piraeus project represents a key milestone in the Belt and Road initiative [Beijing’s initiative to boost China’s transport and trade links with Europe – Ed.], and the port’s growth and prosperity will boost economic development both in China and Greece, ushering in a new era of trade cooperation and cultural exchange between east and west,” said CEO of COSCO Shipping Wan Min.

The Port of Piraeus is a gateway to Asia, Eastern Europe, and North Africa. It handled 16.8 million passengers and 3.6 million 20-foot containers in 2014.

“The cooperation at Piraeus port is not just an economic collaboration but has strategic characteristics. Greece, via the Piraeus port, can indeed become China’s gateway into Europe to the benefit of China and Greece,” Pitsiorlas told Xinhua News Agency. - Russia Today

The European Union is at a tenuous point in the coalition’s history as economic problems. coupled with political upheavals, have shattered many long-standing alliances on the continent, as seen recently by Britain’s decision to leave the union. 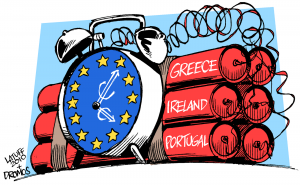 Greece has forever been the pivot point for foreign entry into Europe since the EU decided to throw them to the wolves and refuse to implement a solid bailout of their financial system back in 2013.  Indeed, even back when the Troika was playing hardball with Greece over their debt problems two years ago there was much talk of Russia offering a potential bailout to the beleaguered European state if Greece left the EU and moved into the Eurasian sphere of influence.

The future of the European Union may rest upon their ability to re-energize and reform political controls they have slowly enacted on member states over the past decade, causing many of these nations to seek partnerships outside of Europe simply to survive out of the continent’s Great Recession.  And unless the government in Brussels begins to act quickly, and with some real temerity, economies like China and Russia will continue to gain more and more ground in Europe, and simply end the union’s power through acquisition of its vital industries.