ROMNEY WORDSWORTH - Having watched the first debate between Donald J. Trump and Hillary Clinton/Lester Holt last night, it is my opinion that Clinton/Holt scored a Minor Victory in the first debate.  Here’s why:

First and foremost, Clinton passed the physical stamina test.  It cannot be overstated how important it was for Clinton to get through the 90 minute debate without reigniting the firestorm of questions already swirling through the minds of voters.  It was a tightrope that Clinton had to cross without quarter.  Whatever her team did to her worked.  No coughs, and she even stood by herself while wearing heels.  Nor did she run off the stage after the debate, but lingered on the stage.  It was everything that is expected of a candidate in terms of health and stamina.  That alone qualified the evening as a minor victory for Clinton.

But it was also a minor victory on content for Clinton, by the way Lester Holt steered the questioning and how Trump missed many opportunities to attack Clinton.  The evening was one long series of missed opportunities for Trump to land a punch on Clinton.  Trump failed to bring up Clinton’s email scandals when the subject of cyber security was discussed.  Trump failed to bring up the fact that the Clinton Foundation kept all the money it raised for Haitian Relief except for 5%, when the subject of honesty and fair dealing came up.  Trump failed to bring up Clinton’s failures in Benghazi and Egypt when foreign policy was discussed.  He could have blown wide open that Benghazi was really about the illegal arming of ISIS by Obama in Syria, but failed to do so.  Instead, he got stuck on talking about the financials of his company when attacked over his bankruptcies, when he could have attacked Clinton for selling access at the State Department and being a paid agent of the Saudis and the Chinese.   This is far from an exhaustive list of Trump’s missed opportunities, but you get the idea. 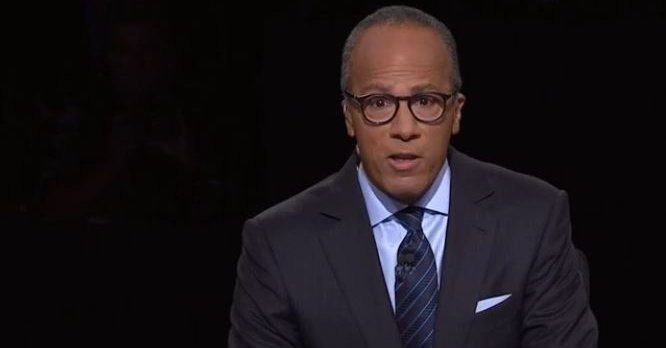 While the debate was supposed to be divided into 3 broad subjects, “Achieving Prosperity,” “America’s Direction” and “Securing America”, this did not stop Lester Holt from attacking Trump with questions over “Birtherism” and Trump’s tax returns, clear gifts to Clinton that had nothing to do with the topics of the debate.

Holt also repeated the Clinton campaign lie that Trump also supported the War in Iraq, forcing Trump to have to rattle off a list of media interviews that contradict that assertion.  An honest moderator not in the tank for Clinton (and a donor to the Clinton Foundation) wouldn’t have tried to push such a false premise in the first place.

That said, Trump carried himself in an acceptable “Presidential” manner.  Clinton failed to paint Trump as a dangerous lunatic who can’t be trusted with the presidency.  Sure, she makes the accusation, but it falls flat and Trump does not fit the accusation.  This is the same card that DemocRats have played against Barry Goldwater in 1964, Ronald Reagan in 1980 and George W. Bush in 2000.  It was only successful against Goldwater.  Like Reagan, Donald Trump showed viewers a candidate that does not fit the portrayal of him in Clinton attack ads.

Trump came off as earnest, if somewhat flustered, while Clinton began the debate with robotic and obviously rehearsed lines (leading me to believe that Clinton was once again given the questions ahead of time by her allies at NBC).

Nor has Clinton appeared to sway many minds following the debate:

This limits the night to a minor victory for Clinton, and not a major one.  There was no gaffe by either candidate that cost them the election.  There wasn’t even a lasting one line zinger that will dog either candidate for the rest of the election, on the order of Lloyd Bentsen’s riposte to Dan Quayle that “you’re no Jack Kennedy”.