On March 10 the European Central Bank (ECB) issued its highly anticipated policy announcement, and the shift from simply watching market action from the shadows is now over.  This is because ECB head Mario Draghi rocked the financial world with a Euro denominated bazooka, and proved once again that markets no longer function on fundamentals, but instead on credit based interventions.

Although not quite going full tilt into negative interest rates, the ECB did lower rates at its primary lending facility to zero from 0.05%, and dropped its deposit rate 10 bps to -0.40 which is an indication the central bank wants Europe’s financial institutions to borrow and spend rather than borrow and save.

At today’s meeting the Governing Council of the ECB took the following monetary policy decisions:

(1) The interest rate on the main refinancing operations of the Eurosystem will be decreased by 5 basis points to 0.00%, starting from the operation to be settled on 16 March 2016.

(4) The monthly purchases under the asset purchase programme will be expanded to €80 billion starting in April.

(5) Investment grade euro-denominated bonds issued by non-bank corporations established in the euro area will be included in the list of assets that are eligible for regular purchases.

(6) A new series of four targeted longer-term refinancing operations (TLTRO II), each with a maturity of four years, will be launched, starting in June 2016. Borrowing conditions in these operations can be as low as the interest rate on the deposit facility.

The President of the ECB will comment on the considerations underlying these decisions at a press conference starting at 14:30 CET today. - ECB.Europa.EU

Unlike the Federal Reserve’s ‘attempt’ last December to hint to the markets that the economy was stable via a .25% rate hike, the ECB today mirrored several EU state banks in dropping interest rates lower, and increasing bond buying programs that have already helped lower the Euro against the dollar, and propped up equities following their announcement. 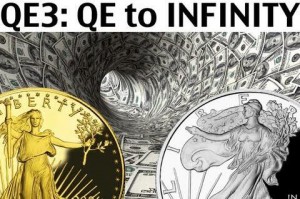 As long as central banks continue to intervene with monetary policies never before seen in history (Like ZIRP and NIRP), the fallacies of economic recovery and stability will be just that, lies told to protect the bank’s incompetence and political entities within the Eurozone.  But the inevitable end game will be one where when the next crisis hits, central banks like the ECB and the FED will have no ammunition left, leaving markets to fall precipitously when they realize that there is little actual aid coming from the masters of the banking universe.