Just as the Patriot Act has done little to stop terrorism within the United States, so too has Dodd-Frank and bank bailouts not righted the ship following the 2008 credit crisis.  But in each of these laws is the underlying truth that they have accomplished exactly what Congress intended them to do, and that is to put the screws on the rights and liberties of the American people.

For the Patriot Act, we now have 100% total surveillance without a court order, and the creation of a government agency (DHS) that labels honest Americans, not Islamic militants, as the number one threat to the country.

And with Dodd-Frank and the Fed’s use of Quantitative Easing (QE), the elites work in the financial real is nearly complete as a new report out shows that the disparity and wealth inequality between the 1% and the rest of America is now at the highest level in history.

Greater than during the Roaring 20’s, and the Gilded Age.

In most of the 34 countries in the Organisation for Economic Cooperation and Development the income gap is at its highest level in three decades, with the richest 10 percent of the population earning 9.6 times the income of the poorest 10 percent.

The wealth gap is even larger, with the top 1 percent owning 18 percent and the 40 percent only 3 percent of household wealth in 2012.

“We have reached a tipping point. Inequality in OECD countries is at its highest since records began,” said OECD Secretary-General Angel Gurria. - Zerohedge 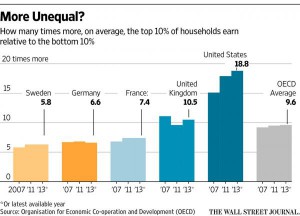 To give an even greater perspective to how much wealth is controlled and transacted by the 1% in the U.S. economy, all one has to do is look at the results of the latest construction report, which shows that 82% of all new construction in the economy is for high end luxury units, unaffordable by anyone but foreigners and the rich.

Throughout history whenever wealth inequality reaches a certain maxim, the end result is nearly always revolution.  The French, Mexican, and even American revolutions all were done because of money and the elite having much more than the majority of their populations.  And for those who do not remember their history from 100 years ago, the stock market crash and subsequent Great Depression nearly led to a new revolution in America, only stalled by the government opening up its coffers to buy off the jobless and poor.  And while revolution has not percolated yet here in the states, it is definitely rearing its head in Europe for the same reasons.