It is a given that once power is achieved in a particular sphere, those in authority are never content to remain satisfied with what they rule over.  In fact, conquest has always been the underlying motivation for leaders since the beginning of time.

And while having a joint coalition of nations within the European continent is a marvel unto itself, this grand scheme is evolving into a technocratic takeover, where removal of national sovereignty is the ultimate goal, and can be seen in examples like on Feb. 8 where two of the continents leading central bankers are now calling for a singular Eurozone finance ministry to oversee and control the economies and financial systems of all member nations.

The eurozone needs structural reform and closer financial integration, including the creation of a joint finance ministry, say the heads of the German and French central banks.

In a guest article for the German daily Sueddeutsche Zeitung they wrote that the current state of the eurozone was far from ideal and European Union integration is at a crossroads.

The European Central Bank (ECB) is not in a position to create sustainable long-term growth for the 19-nation single currency bloc, according to the banks’ chiefs.

According to them, the creation of a common finance ministry with an independent fiscal council and the formation of a stronger political body could help overcome the European debt crisis. - Russia Today

The European Union, and especially the European Central Bank (ECB), are the poster children of the Hegelian Dialectic where to achieve a desired goal, the bodies created a problem for most Eurozone nations, and then come ‘benevolently’ out with a solution to the very problem they created.  In fact, ever since the EU went to the Euro currency in 1999, it took less than 10 years to fiscally bankrupt most member states, similar to how the creation of the Federal Reserve brought the U.S. to bankruptcy 20 years (1933) after its inception. 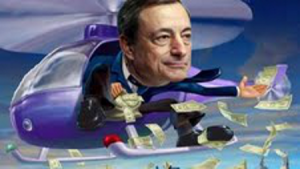 The West is trying hard to subjugate Latin American and European states through secret draconian trade agreements like the TPP and TTIP, and through measures such as austerity to make it so they can never recover from their debt driven environments.  And like the example of Greece, which was forced to take on bank debts that were not of their own choosing and later were not given the ability to renegotiate those onerous debts, it appears that the central banks are now trying to implement their next scheme of control by proposing a singular financial body in Europe which will inevitably subjugate the entire EU.