In the continuing saga of Eurozone financial difficulties, Greece continues to be the linchpin for the economic Troika of the IMF, European Commission (EC), and European Central Bank (ECB) to hold the line against sovereign nations potentially defaulting on their debts and subsequently exiting from EU control.  And in a new Wikileaks data dump on April 2, it appears that members of the IMF were caught discussion the creation of a financial collapse event in Greece to force the government to succumb to the wills of the Troika.

This morning we got another confirmation of how supernational organizations “plan” European crises in advance to further their goals, when Wikileaks published the transcript of a teleconference that took place on March 19, 2016 between the top two IMF officials in charge of managing the Greek debt crisis - Poul Thomsen, the head of the IMF’s European Department, and Delia Velkouleskou, the IMF Mission Chief for Greece.

In the transcript, the IMF staffers are caught on tape planning to tell Germany the organization would abandon the troika if the IMF and the commission fail to reach an agreement on Greek debt relief.

More to the point, the IMF officials say that a threat of an imminent financial catastrophe as the Guardian puts it, is needed to force other players into accepting its measures such as cutting Greek pensions and working conditions, or as Bloomberg puts it, “considering a plan to cause a credit event in Greece and destabilize Europe.”

According to the leaked conversation, the IMF - which has been pushing for a debt haircut for Greece ever since last August’s 3rd Greek bailout - believes a credit event as only thing that could trigger a Greek deal; the “event” is hinted as taking place some time around the June 23 Brexit referendum.

Onerous debts, and actions by the Troika over the past five years have led up to a rebellion against the viability of the European Union, and its attempts to usurp sovereign power from all members states.  And in just the past two years alone, political upheavals which have led to the election of the Syriza Party in Greece, Marie Le Penn’s anti-EU party in France, and of course, the upcoming referendum in Britain to leave the EU entirely, are just a few of the growing number of nation states which are revolting against technocratic and globalist hierarchies that have impoverished hundreds of millions of people, and have made the union itself more powerful than the members who make up the coalition. 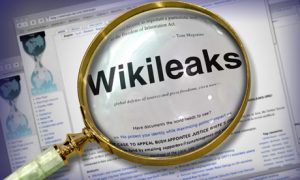 It is not yet clear how today’s Wikileaks report will affect the upcoming British referendum, or even the ongoing discussions over Greek austerity, but what is clear is that it will not help the elites running the European Union in the slightest, and verifies the growing movements against oligarchies and establishments that reside in both Europe and the U.S. are not temporary things, and are grounded in issues exactly revealed today from within the IMF.