If there is one thing Russian President Vladimir Putin is a master at is his ability to gather and hold intelligence until it can be used for a strategic purpose.  Many sources believe that Putin holds disastrous intel on what really happened to the Twin Towers on 9/11, and more recently, his information on flight MH17’s being shot down by someone else has kept the Dutch from crucifying Russia in the aftermath of the tragedy.

And with this in mind it should come as no surprise that as the world rushes in to follow Russia’s lead and finally work to eradicate ISIS, Putin announced during the G20 summit that upwards of 40 nations were culpable and responsible for funding and creating ISIS, including a number of member states within the G20 itself.

President Vladimir Putin says he’s shared Russian intelligence data on Islamic State financing with his G20 colleagues: the terrorists appear to be financed from 40 countries, including some G20 member states.

During the summit, “I provided examples based on our data on the financing of different Islamic State (IS, formerly ISIS/ISIL) units by private individuals. This money, as we have established, comes from 40 countries and, there are some of the G20 members among them,” Putin told the journalists.

Putin also spoke of the urgent need to curb the illegal oil trade by IS.

“I’ve shown our colleagues photos taken from space and from aircraft which clearly demonstrate the scale of the illegal trade in oil and petroleum products,” he said. - Russia Today

Western nations have a long history of speaking out of both sides of their mouths when it comes to war and geo-politics, and it has been only a little more than a decade since nations like France and Germany were outed for their roles in funding Saddam Hussein while Iraq was under U.N. sanctions during the world body’s Oil for Food program.  And of course, in more recent times one of France’s largest banks, BNP Paribas, was cited just a few years ago for aiding Iran in their oil for gold scheme that went against ongoing U.S. sanctions on the Middle Eastern producer. 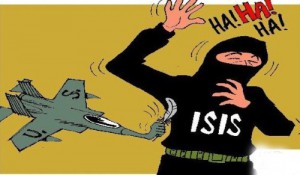 As Rahm Emmanuel said a few years back while working in the Obama administration, one should never let a crisis go to waste.  And for many former and current powers within the G20 group of nations, this axiom is simply standard policy as on the surface they may be criticizing a given country or terrorist group for their horrific actions while behind the scenes they are profiting from it and using the crisis to further their own agendas.

This Is One Of The CLEVEREST E-mails I’ve Received In a While!

BREAKING: The LARGEST MOSQUE in Western Europe is BURNING DOWN As we Speak…What Caused it?