It is fascinating to think that just seven years ago, Goldman Sachs was on the cusp of bankruptcy.  However, thanks to a former CEO of Goldman (Hank Paulson) being in place as the Secretary of the Treasury at the time of the financial meltdown, the bank to the elite was saved when taxpayers bailed out AIG, and allowed Goldman to collect 100% on their worthless securities.

And since this recovery by Goldman on Wall Street, the bank has only gotten stronger, with several more former bankers having moved into key positions in the government and the nation’s central bank.  And with the Fed’s newest President being elected on Aug. 17, there are now three former Goldman bankers running America’s central bank.

Now that Richard Fisher has been put out to pasture (and by “put out to pasture” we actually mean “works for Barclays”), the Dallas Fed needed a new President. Of course when you’re looking around for possible Fed officials one place you want to check is the pool of former Wall Street investment bankers because after all, we have to keep the revolving door spinning.

With that in mind, we present the new President of the Dallas Fed, Harvard professor Robert S. Kaplan who until 2006 was vice chairman of none other than Goldman Sachs. - Zerohedge

The Federal Reserve is not the only Western central bank to be run by a former Goldman Sachs banker.  Over in the Europe, Mario Draghi is the head of the ECB, and has followed the same blueprint of money printing and quantitative easing that has helped the 1% move the wealth of the continents into the hands of a select few. 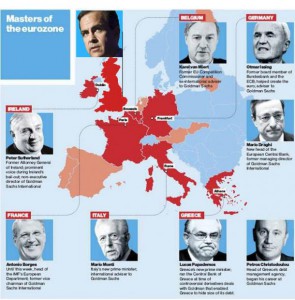 It is fascinating to watch as the banking system has transitioned from the hands of J.P. Morgan into that of Goldman Sachs since the central bank was created over 100 years ago.  But perhaps what is most important thing to realize is that the Fed is and always will be a private bank, that has a fiduciary responsibility to its shareholders, and not the government or people of the United States, and that Goldman Sachs is one of those shareholders and is now well on its way to controlling all aspects of the Western banking system.