Earlier this week, a majority of France’s parliament voted to end their nation’s policy of Russian sanctions in light of a continuing deterioration in their economic output.  And on April 30 another economy, this one from Africa, joined its voice in calling for an end of trade restrictions against Russia that were forged out of Washington’s desire for a resurgence of a cold war against Moscow.

The condemnation of current and ongoing sanctions on Russia by the U.S. was provided by Zimbabwean Foreign Minister Simbarashe Mumbengegwi, who spoke out against Washington during trade talks with Russian Industry and Trade Minister Denis Manturov.

On Friday, Manturov visited the Zimbabwean city of Bulawayo to attend the Zimbabwe International Trade Fair, where Russia is presenting a number of products and services.

“We stand for the complete abolition of the unjust sanctions,” Manturov said after the meeting of the intergovernmental Russian-Zimbabwean commission, co-chaired by the Russian official and Zimbabwean Foreign Minister Simbarashe Mumbengegwi.

The Zimbabwean top diplomat added that it was necessary to unite the two countries’ efforts to prevent damage to their economies, as was intended by the Western states. – Sputnik News

In recent days Zimbabwe has been moving ever closer towards Eastern hegemony as earlier this month the African economy ended its currencies affiliation with the U.S. dollar, and began to function with the Chinese Yuan in both domestic and international use. 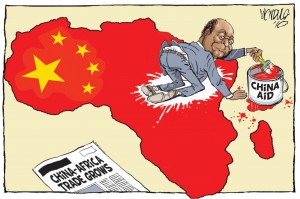 As the battle continues between the U.S. (West) and the coalition of BRICS economies for dominion over trade and the next global economic system, more and more nations like France and Zimbabwe are choosing Russian influence over the strong arm of American foreign policies.  And with the assassination of Libya’s leader fresh in the minds of many African countries, especially since Qaddafi was leading the charge to unite the continent with a new gold backed currency, petty restrictions like economic sanctions no longer are being accepted by nations long subjugated under the thumb of Washington, and their economic warfare.