Any investor with two brain cells knows that the recent jump in equities has nothing to do with a fundamental or technical change in the value of companies, but in central banks buying stocks to keep deceiving the public that the economy is doing well.  And despite all the hoopla of markets soaring to record new all-time highs in just six trading days at the beginning of July, the newest Gallup Poll on economic confidence dispels this belief and shows that the public trust in the economy has fallen to multi-year lows.

One place which fails to corroborate the recovering economy are the monthly Gallup surveys, and especially the most recent one released earlier today, according to which Americans’ confidence in the economy remains weak, with Gallup’s U.S. Economic Confidence Index at -17 last week, consistent with levels seen since mid-June. This is in contrast to the stronger confidence levels seen for most of the first half of the year, when the index averaged -12. At -17, this reading is tied for the worst economic confidence reading recorded in the last few years, and suggests that Americans’ take on the economy is getting worse, not better. - Zerohedge 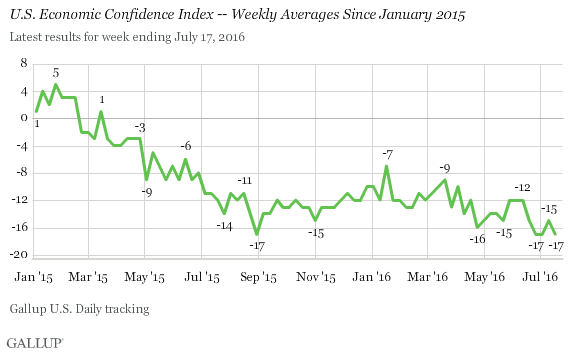 This lack of confidence is also validated by a new report out from the IMF that stated, “The global economic outlook for 2016-2017 is worse than previously anticipated due to uncertainty following the UK decision to exit the European Union.”

The mainstream continues to ignore the fact that the world is rejecting the status quo, and that central bank and government policies since 2008 have only driven the 99% poorer, and siphoned wealth upwards to a chosen few.  And while they try their best to promote stock markets as the real signal for a ‘growing’ economy, the fact of the matter is these same central banks would not be implementing negative interest rates,  or talking about issuing free money to consumers if the economy was actually doing well.

In 2008 both the media and financial analysts were acting like Pollyanna right up until the day when the entire system collapsed.  And since they are once again only thinking about their personal profits to the detriment of the nations and peoples that have not recovered in both wealth and positions during the last eight years, it is no wonder that very few have confidence in this economy, or that they believe the current gatekeepers in finance and government are worthy enough to manage it.