In new set of polls released by the Rasmussen institute, nearly 50% (45%) of those polled believe that the upcoming Jade Helm exercise could lead the Federal government to expand their control over state authorities.  And while 64% polled believe that domestic training exercises are a positive thing, a growing portion of the population is unwilling to trust that Jade Helm is limited to simply a training exercise, especially in light of the recent events such as what took place in Nevada at Bundy Ranch.

Eight weeks of U.S. military exercises this summer in several southwestern states - dubbed Jade Helm 15 - have some wondering if the government is preparing for martial law. Most voters don’t oppose such exercises, but a surprising number worry about what the federal government is up to.

But 45% of voters are concerned that the government will use U.S. military training operations to impose greater control over some states, with 19% who are Very Concerned.

Among voters who oppose military exercises in their state, 82% are concerned that the federal government has greater control in mind. - Rasmussen Reports

Jade Helm 15 is scheduled to take place between July 15 - Sept. 15, and occur in five states where the scope of the exercise delegates these regions as potentially insurgent to the Federal government.  And what adds fuel to the fire that this event is more than just an exercise are the new revelations that ISIS is now residing just eight miles from our Southern border, and that forecasts of an upcoming economic collapse could take place sometime around September/October.

It is not a coincidence that the U.S. government was running training exercises during two of the most horrific tragedies on American soil over the past 40 years.  During 9/11, the military, along with other Federal agencies, were running a set of exercises tied to terrorism which occurred at the same time the twin towers were coming down in New York City.  Additionally, during the Boston Marathon massacre, runners were warned of an ongoing training exercise involving dogs and personnel looking for bombs or other explosives.  In both instances, the government neither attempted to stop the terrorist events from happening, and as some have implied in the media, the exercises provided cover for the tragedies to take place. 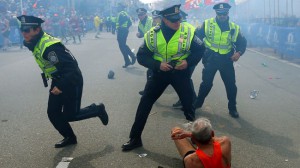 There is a reason why the Posse Comitatus law was passed after the Civil War, and its purpose was to ensure the American people that the military would never be used for domestic law enforcement.  And with Jade Helm acting as a precursor to the implementation of martial law in the event of an economic or societal breakdown, all one has to do is go back and listen to Congressman Brad Sherman who validated that he and others were told that if the legislature didn’t bail out the banks back in 2008, then martial law would be imposed.