On Aug. 14, the Greek Finance Ministry ordered the implementation of perhaps the most stringent capital controls in decades against their own people by ordering citizens to declare all assets they own, including cash down to the last euro.

This program is the first step in a larger scheme set to commence in February of 2017 where the government is able to track the wealth of every individual, and if necessary, confiscate this wealth as needed. 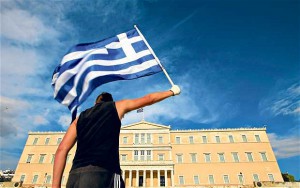 The long planned registration of all kinds of private wealth will go into effect in February 2017. More than 8,500,000 tax payers registered in Greece will be called to declare all moveable and immovable assets, their total “wealth”, and even cash they possess even if it is below 100 euro. Furthermore, the taxpayers will have to register changes in their assets when they occur and not annually.

Tax authorities will upload on their website pre-filled data like real estate, declared income, income from rents, loans, vehicles etc – practically they pre-filled data will refer to data given by taxpayers in their income declaration.

In the new scheme to have registered everything the trouble Greek owns, the taxpayers will have add moveable and immovable possessions such as paintings, antiques, jewelry, even historical weapon, etc but also the cash they have in their wallets or under the mattress.

“Taxpayers must declare all the cash they have in their hands, even one euro!” an official from the Finance Ministry told newspaper To Vima on conditions of anonymity. - Keep Talking Greece

Despite the propaganda most Western governments are using to tell their people how well their economies are doing, the fact of the matter is most systems stand on the precipice of another liquidity crisis, otherwise low interest rates and quantitative easing programs would have ended months or years ago.  And with the threat of negative interest rates leading many to start to move their money out of the banks and into alternative forms of currency such as Bitcoin and gold, governments are now seeing the need to demand asset registration because it appears one day soon those assets will be needed and/or confiscated to pay for the failures of their fiscal decisions.