Since the middle of 2015, global central banks have been dumping Treasuries and other dollar reserves at record levels to accommodate a number of different needs within their own monetary policies.  For some like China, the dumping of dollars has helped the Far East economy protect their currency and ensure exports remain at the lowest costs achievable.  And for nations like Russia and Saudi Arabia, the selling of dollars has been a necessity to boost their budgets during the advent of low oil prices.

But perhaps the biggest reason behind the dumping of dollars en masse by central banks has been the rush out of the reserve currency, which is becoming less a requirement now that direct bi-lateral trade has returned to the global economy.

In March, central banks from around the world dumped $17 billion in American Treasuries. Since the beginning of the year the sell-off has reached $123 billion, which is the quickest pace since 1978.

“It’s more of a global fear than anything. There’s still this fear of everything is going to fall apart,” Ihab Salib, head of international fixed income at Federated Investors told CNN. - Russia Today

Since last August, over $1 trillion worth of short term Treasuries have been sent back the U.S., forcing the Federal Reserve to unwillingly raise interest rates to protect their use of the repo markets to buy these dollars outside the normal bond market channels. 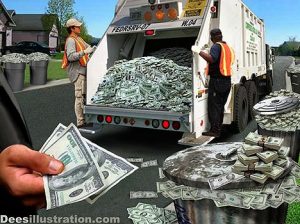 As nations begin to turn away from dollar hegemony, and even ponder such actions as a return to the gold standard to stave off what appears to be the prelude to a new global monetary crisis, the need for dollars and Treasuries is diminishing rapidly.  And since the U.S. assuredly will not give away its Bretton Woods power willingly, isolation of the reserve currency in the global economy appears to be the simple response for nations wanting to de-dollarize for the future.