What do the Warren Commission, the 9/11 commission, and the Financial Crisis Inquiry Commission all have in common?  They were formed by the government to protect the actual criminals involved in these crimes and instead scapegoat others to try to appease the public.  And thanks to new documents released from the commission created following the 2008 Credit Crisis, we see that not only did the Obama administration fail to indict criminals from the banking sector who defrauded the American people, in many cases they even abetted their crimes in a quid pro quo masquerade of fines and payola.

And of course this led to then Attorney General Eric Holder, a Wall Street lawyer with massive ties to the banks and entire financial industry, to make the fallacious claim that the banks were ‘took big to jail‘, and ignored FCIC recommendations for prosecution in favor of small fines that allowed the participants to never answer for their crimes, and in fact, to keep on perpetrating even more.

Newly public documents from the Financial Crisis Inquiry Commission show that the FCIC referred a handful of matters to the Justice Department for possible prosecution. Most of the time, nothing happened.  In the cases where something did happen, our modern system of justice—the special one that applies to big business, that is—means that those of us on the outside—citizens, on whose behalf justice is supposed to be served—will never know the underlying truth.

The FCIC was set up to investigate the causes of the financial crisis.  The commission didn’t have either the authority or the resources to do a criminal investigation.  But as the documents show, a number of matters—involving Goldman Sachs, AIG, Merrill Lynch, Citigroup and Fannie Mae—were referred to the Attorney General.  No criminal prosecutions arose from any of those.  (In Citigroup’s case, the SEC settled with the company and two executives in the fall of 2010 for a paltry sum.  The Commission drily noted, “The SEC’s civil settlement ignores the executives running the company and Board members responsible for overseeing it.

“The United States believes that there is an evidentiary basis to compromise potential legal claims by the United States against Morgan Stanley for violations of federal laws in connection with the packaging, marketing, sale, structuring, arrangement and issuance of these RMBS.”  What this means is that the Justice Department wasn’t sure that a case against Morgan Stanley was winnable.

So the two sides hammered out a settlement, every single word of which you can bet was heavily negotiated.  The Justice Department gets money, and gets to trumpet a victory, and Morgan Stanley and its employees get to walk away. - Yahoo Finance

Over the past six years following the FCIC’s report, the Justice Department and the Obama administration followed the same course of action with banks who engineered fraud in Libor, FX, the gold and silver markets, money laundering, and abetting terrorism… ie… they simply ordered a fine and swept the criminal activity under the rug.  And the end result has been for bankers who should have been indicted and convicted to now become billionaires in a fascist game where crime does pay when you buy off the regulators who are assigned to monitor your activities. 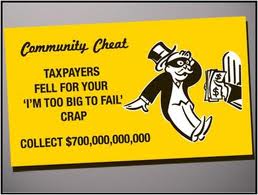 As we come to the final months of President Obama’s second term, history will show that this Commander-in-Chief did more to protect the financial industry and its criminal activity than any Executive ever, including the fraud and corruption of the Harding administration 90 years ago.  And with this in mind, it should not take a rocket scientist to realize that when the next financial crisis hits, it will once again be the people who suffer and pay, and the bankers who get off with simply more bonuses.