A classic American song that originated in 1946, but was made famous by Tennessee Ernie Ford nine years later, speaks on American workers in the mining industry who were forced to use their wages in the mining company’s store, leaving them eternally in debt and eternally slaves to their jobs.  And while this song’s origins come from a real time in America’s history, as usual that same history is coming back today in a whole new rhyme.

That is because due to the decline in overall wages since the late 1970’s, more American workers are being forced to borrow from ‘payday’ lenders just to make it from check to check.  And rather than see their employees borrow money from a third party agency, companies are now giving workers their own version of ‘payday’ loans at a modicum interest of only 6-18%.

So the Warren, N.J., employer of call-center workers and cable installers began offering employees a new benefit: low-interest loans to help pay for things such as car repairs and health expenses.

Worried about their financially strapped workforce, a handful of companies are stepping in to offer employees alternatives to payday loans and other expensive financial products.

While few other employers go that far, managers know that financial worries are taking a toll on U.S. workers. A recent PwC survey of 1,600 full-time employed adults found that 40% find it difficult to meet monthly household expenses and 51% consistently carry balances on their credit cards.

As an alternative, employers are joining with firms such as Kashable LLC, Ziero Financial Inc. and Zebit Inc. to help fund and service loans. Some companies are offering those products in conjunction with employee-focused seminars about saving, budgeting and debt.

Many of the 100 employees of the Atlanta insurance provider “live paycheck to paycheck,” she said, and were borrowing against their 401(k)s. After realizing the company wouldn’t be liable if employees defaulted, she signed up with Kashable about two years ago.

Kashable’s interest rates typically range from about 6% to the high teens, lower than what people with middling or low credit might get on their own, said founder Einat Steklov. – Wall Street Journal

Earlier today, the Atlantic came out with the results of a new survey in which 47% of Americans polled said they could not come up with $400 if necessary without borrowing the money, or having to sell a personal item for cash.  And this number increases even more if the need is for $1000 or more, which is possible in cases like a medical emergency or automobile breakdown. 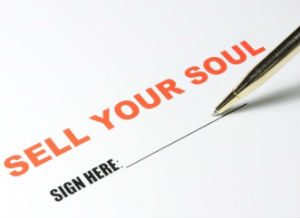 Contrary to Obama’s ‘you’re peddling fiction’ if you say the economy is not doing well under his administration, the fact of the matter is that the Middle Class has been destroyed in the seven years since the President took office back in 2009.  And despite tens of trillions poured into the banking system by the Fed in an attempt to ‘stimulate the economy’, things have now gotten so bad for America’s workforce that it is once again true that many owe their souls to the company store.