One of the biggest problems with the majority of politicians coming from the lawyer class is that they have little idea about fiscal responsibility and economics, or any understanding of the consequences that come from promising the world to voters in order to get re-elected.  In fact, Washington is not only known for trying to buy votes from constituents with ever increasing benefit programs, but they are the also the poster child of robbing Peter to pay Paul when it comes to things like stealing from the Social Security Trust to pay for new programs.

Municipalities are not immune to this paradigm as well, with many liberalized cities having chosen the path of egregious fiscal policies which are now coming home to roost as their budgets run deficits that place them on the cusp of insolvency.  And perhaps the biggest culprit in this is the City of Chicago, who after years of making pension promises they couldn’t hope to keep are on the verge of being downgraded to junk status and out of options when it comes to paying out benefits to retirees.

“These modifications to pension benefits unquestionably diminish the value of the retirement annuities the members of (the city workers and laborers funds) were promised when they joined the pension system,” the high court wrote in its opinion. “Accordingly, based on the plain language of the act, these annuity reducing provisions contravene the pension protection clause’s absolute prohibition against diminishment of pension benefits, and exceed the General Assembly’s authority.”

“The ruling eases some immediate demands as the overturned law had stepped up the city’s required contributions,” Bloomberg wrote on Monday afternoon. “Without the restructuring, the unfunded liabilities of the municipal and laborers funds will climb by $900 million a year, making them insolvent by 2026 and 2029.” - Zerohedge

As of the middle of last year, the total underfunding for the 50 U.S. states was now over $1 trillion, with several states sitting at 50% or less in being properly funded to pay their obligations.  And this also doesn’t count many union pensions which through neglect or corruption are now attempting to cut payments to their members. 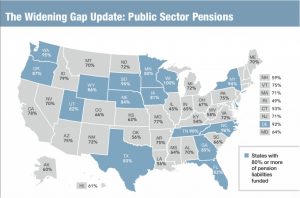 The sad fact of the matter is, people rely too much on others to be responsible for their retirements, and are too trusting that elected officials in both the public and private sectors will ensure their money is safely kept and invested.  And when the public doesn’t demand constant vigilance and transparency from their local and national governments in matters such as pensions and overall budgets, they will inevitably wake up one day to discover that the promises made by politicians were a secure as the words that come from a con man.