One of the funniest and perhaps saddest commentaries regarding the ability of the Federal government to either fix or run a financial enterprise is that when Uncle Sam co-opts a business platform, the end result is almost always insolvency, or the need for taxpayer bailouts.  In fact, all one has to do is look at the government’s takeover of mortgage and student loan lenders Fannie Mae and Sallie Mae to see that elected officials and their bureaucracies are so incompetent when it comes to finance and running a business, they quite often spend more money keeping these entities afloat than the value of the business was worth.

So when the American people desperately need their government to solve a problem tied to the future of Social Security, Congress’s new planned solution and predictable outcome should come as no surprise.

In a new piece of legislation called the ‘One Social Security Act’ (HR 3150), Congress is seeking to merge two separate entities under the Social Security Administration into one, thus masking the insolvency of both programs and making your retirement insurance now fully integrated with those receiving benefits as a disabled American.

If you’re not familiar, Social Security is comprised of two primary trust funds: Old-Age and Survivors Insurance (OASI) and Disability Insurance (DI).  Essentially, all of the taxes paid in to Social Security end up in one of these two trust funds.  The trust funds then ‘manage’ the money to generate a rate of return, and then pay out distributions to program recipients.

Now, the funds are overseen by a Board of Trustees which is obliged to submit an annual report on the fiscal condition of the program. It ain’t pretty.  The Disability Insurance (DI) fund is particularly ugly. In fact, the trustees themselves wrote in the 2015 annual report that

and,  “The DI Trust Fund reserves are expected to deplete in the fourth quarter of 2016…”  In other words, one of the two Social Security trust funds is just months away from insolvency.

Not to worry, though. Congress is on the case.

Late last week, several dozen members of Congress introduced the “One Social Security Act”, HR 3150, to solve this problem.  And let me tell you, their solution is bold. Fearless. And brilliant.

HR 3150 attacks the looming insolvency of Disability Insurance by eliminating the fund altogether.  So instead of having two separate funds for two distinct purposes of Social Security, the legislation aims to combine them into one unified fund.  That way, with just one fund, there won’t be any separate reporting about DI’s insolvency. - Sovereign Man

When Social Security was first introduced, it was promised to the American people as an insurance program dedicated solely for helping retirees in their later years have an income to pay for necessary expenses.  But over time, corrupt officials expanded the program to cover things such as disabilities, and children of deceased parents as a way to garner campaign votes in their districts, or for their political party.  And of course, the fund was stretched even further when it was later tied to inflation, which increased benefit costs through COLA’s, or Cost of Living Allowances on an annual basis. 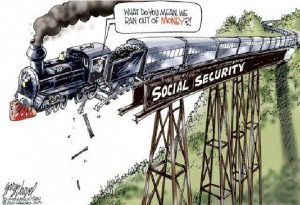 Yet even this was not enough for Congress, nor for several Presidents since the late 1960’s who took money from the trust fund and used it to further their own political agendas, leaving the fund now completely empty, and holding over $3 trillion in Treasury Bond IOU’s that can never be repaid, only rolled over until the system collapses.

There is very little that the Federal government can run with fiscal responsibility, and without corruption in one form or another.  From the removal of Glass-Steagal which led to the 2008 taxpayer bailouts, to the co-opting of Fannie and Sallie Mae which has already cost taxpayers trillions of dollars in un-necessary funding, their new scheme of merging all programs within Social Security under one umbrella will only result in several categories of benefactors losing out when the truth of this now insolvent agency finally reaches the end of the line.