One of the primary reasons why the states of Colorado and Washington finally capitulated to the legalization of marijuana was because of economics.  Ever since the collapse of the housing bubble and the 2008 Credit Crisis that saw millions lose their homes and jobs, state and municipal revenues have fallen off a cliff in many areas around the country.

And the windfall that has come from the legalization of marijuana is just one of many revenue streams that states are now relying upon as the return of ‘sin taxes’ to the limelight are usurping religious, social, and liberal agendas to end these activities all across the country.

Eleven states collected over $1 billion from sin taxes. These states are identified by the darkest color on the visualization above. Pennsylvania led the way with $2.7 billion in sin tax revenues.  The Keystone state generated over $1 billion from tobacco revenue alone, one of only three states to do so. This was followed by revenue from racino in excess of $770 million and casino revenue of $575 million.

Pennsylvania is closely followed by New York with around $2.65 billion in sin tax revenue. Close behind in third was Texas with $2.51 billion in sin taxes. The other eight states in excess of $1 billion were Nevada, Indiana, Illinois, Ohio, Michigan, New Jersey, Florida and California.

At the bottom end of the scale, Wyoming had the lowest amount of “sin tax” revenue with only $26 million. North Dakota was in second place with only $41 million.

Taxes on tobacco products is a major source of sin tax revenue. As stated previously, only three states generated in excess of $1 billion in revenue from tobacco. New York took in the largest amount of tobacco taxes with $1.446 billion, in a virtual dead heat with Texas who also took in $1.446 billion. Pennsylvania generated the third largest amount of tobacco revenue at $1.028 billion. On the lower side of the scale, Wyoming only collected $24.4 million in tobacco. South Carolina was the second lowest with only $25 million generated from taxes on tobacco.

Another major category of sin taxes is alcohol. As shown by the visualization, Texas was the only state to generate over $1 billion in revenue from alcohol. The next closest state in a distant second was Florida with $452 million. New York was third far behind Florida with only $250 million in alcohol tax revenue. Wyoming saw the lowest amount of revenue with only $1.8 million from alcohol.

Only certain states allow casinos, thus geographically limiting the amount of revenue generated in this category. Not surprisingly, Nevada led the country in casino taxes with $912 million. The home of Las Vegas, casino revenue is a major source of income for the state. Pennsylvania was in second with $575 million in casino tax revenue. West Virginia was lowest in the category and only saw limited casino revenue of $3.8 million. - How Much 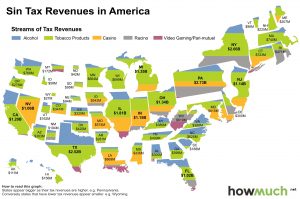 Ironically, before the advent of the Income Tax Amendment in 1913, revenues from ‘sin taxes’ made up 50% of the total budgets for both state and Federal governments.  And these types of taxes were the cause of the first major skirmish in America following their independence when the Whiskey Rebellion forced the government to call in militias to make alcohol distillers pay taxes on their production and output.

The continuous demand for more revenue by the government will only see an increase in taxes on what they determine as luxury or discretionary for citizens living within the United States.  And besides being a catalyst for the legalization of marijuana over the past five years, it may also lead to even more ways Uncle Sam can collect taxes by expanding casino access online, or perhaps even legalizing more drugs such as heroin, opium, and cocaine.