During Barack Obama’s tenure in office, Americans on welfare have ballooned to a massive 1/3 of the total populace, with more than 100 million receiving some form of government benefit.  And in the final year of his Presidency, the expansion of the welfare system appears to not have gone far enough for Obama.

That is because in the midst of his agenda to bring in tens of millions of more illegals on top of the estimated 30 million already undocumented in the country, a new report out shows that illegals receive more in taxpayer benefits via welfare than actual American citizens do.

Illegal immigrant households receive an average of $5,692 in federal welfare benefits every year, far more than the average “native” American household, at $4,431, according to a new report on the cost of immigration released Monday.

The Center for Immigration Studies, in an analysis of federal cost figures, found that all immigrant-headed households — legal and illegal — receive an average of $6,241 in welfare, 41 percent more than native households. As with Americans receiving benefits such as food stamps and cash, much of the welfare to immigrants supplements their low wage jobs. 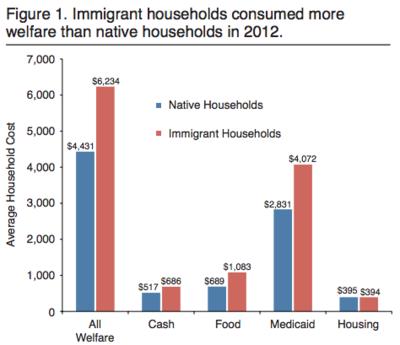 The total cost is over $103 billion in welfare benefits to households headed by immigrants. A majority, 51 percent, of immigrant households receive some type of welfare compared to 30 percent of native households, said the analysis of Census data. - Washington Examiner

$103 billion directly given to illegal aliens in welfare.  Imagine what re-directing that annual cost would do if it were instead dedicated towards underfunded pension funds, which for many are now sitting on the cusp of insolvency.

When you add up all the money wasted in unlawful wars, unnecessary welfare, and in schemes such as national healthcare, those funds could very easily right the ship for most state budgets, and help create an economic boom as money was re-directed towards jobs and actual productivity.  And the easiest way to get started towards that would simply be to stop providing welfare to those who shouldn’t even be in this country, and start punishing criminal activity instead of rewarding it.