After Greece changed course back in July and accepted the Troika’s demands for austerity measures to receive a new bail-out, the assumption was that only bond holders would be subject to any sort of risk that might see their securities decline, or perhaps even fall to zero.  Yet as one knows in the financial industry, and in the case of central bank policies, you can never fall asleep believing that your money is ever safe.

According to EU legislation that is in line with January’s G20 resolution, and is similar to Section II of America’s Dodd-Frank laws, starting on Jan. 1 any and all bank deposits within Greece (and the rest of the Eurozone) can and will be subject to confiscation and bail-ins to re-capitalize their banking systems.  And with these banks having already seen over $100 billion removed by depositors prior to the Greek bank holiday, it is fair to assume that these banks are already close to insolvent, and won’t be waiting long to allocate the people’s deposits towards funding their own deficiencies. 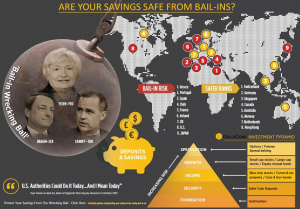 As a reminder, Greece’s euro-area creditors made adoption of the European Union’s Bank Resolution and Recovery Directive, or BRRD, a precondition of the bailout. The directive, which makes it easier to impose losses on senior creditors, should rank senior unsecured bondholders and depositors equally, said Olly Burrows, London-based financials analyst at brokerage firm CRT Capital.

This is something which Dijsselbloem may not have been aware of when he said that one senior class would be impaired while another pari passu group of liabilities, i.e., depositors, would be protected. As noted above, that makes no sense.

Which is probably why earlier today, Bloomberg followed up with a report that a recapitalization of Greek banks will exclude all depositors from losses until the EU’s Bank Recovery and Resolution Directive rules go into effect on Jan. 1, citing an EU official. - Zerohedge

Many Greeks were smart enough to remove their cash from their banking system prior to their government ceding to the Troika, and also instituting a bank holiday for about two weeks.  However, this did not stop the government from putting in place numerous capital controls which left businesses unable to pay suppliers as the controls regulated depositors a maximum of 65 Euros they were allowed to withdrawal from the banks each day. 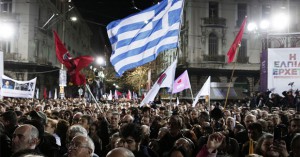 After the banking collapse in the United States back in 1932, the government had to pass a banking act that insured deposits going forward would be protected from financial institutions going insolvent.  And for about 80 years this insurance worked accordingly, and people trusted their banking systems enough to put their money back in.  But since 2010, that insurance scheme is no longer trustworthy, both for Americans and Europeans who have seen governments put in place new measures that allow for the confiscation of deposits by private banks to pay for their bad bets and speculatory failures.  And for anyone who has seen the consequences of Cyprus, and now Greece, if they continue to have trust in the banking system and in governments who pass laws protecting the banks over them, then they will soon reap the results of that trust, and have no one to blame but themselves for failing to heed the warning signs.