There appear to be three primary reasons why Hillary Clinton wants desperately to become the next President of the United States, and none of these reasons has anything to do with leading the American people towards a better country.  First, and as she exhibited during her time in office as Obama’s Secretary of State, it is to enrich herself and her husband Bill by using the Presidency to enlarge the Clinton Foundation through the selling of favors to domestic and foreign nations and enterprises.  Secondly, it is to ensure that her criminal and perhaps treasonous activities never see the light of day of an indictment.  And lastly, it is to fuel her narcissistic psychopathy that the nation owes her the Oval Office whether she is qualified, or even the best choice to run the free world.

We already know from the seven years of Barack Obama’s tenure that the use of the Attorney General’s office was done explicitly to protect rather than prosecute criminal activity, as seen by the fact that both Eric Holder and Loretta Lynch came into office from the same Wall Street law firm that is well known as a lobbyist for banks and corporations to the government.  And as Holder ensured no banks or bankers were ever brought to trial under his policy of ‘too big to jail’, so too is Lynch doing her best to ensure that Hillary Clinton is not indicted despite overwhelming evidence of the mishandling classified documents and their dissemination. 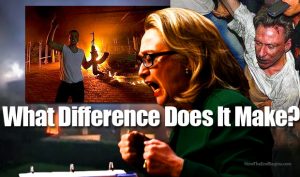 And it appears as well that incidents like the Benghazi cover-up and unlawful mishandling of material through an offshore email server are just scratching the surface as a new report on July 1 emerged that then Secretary of State Clinton also used the power of her office to attempt to find out insider information which would help her son-in-law escape default over bad speculative bets on Greek debt for a hedge fund he ran.

In 2012, Mezvinski, the husband of Chelsea Clinton, created a $325 million basket of offshore funds under the Eaglevale Partners banner through a special arrangement with investment bank Goldman Sachs. The funds have lost tens of millions of dollars predicting that bailouts of the Greek banking system would pump up the value of the country’s distressed bonds. One fund, exclusively dedicated to Greek debt, suffered near-total losses.

Clinton stepped down as secretary of state in 2013 to run for president. But newly released emails from 2012 show that she and Clinton Foundation consultant, Sidney Blumenthal, shared classified information about how German leadership viewed the prospects for a Greek bailout. Clinton also shared “protected” State Department information about Greek bonds with her husband at the same time that her son-in-law aimed his hedge fund at Greece.

That America’s top diplomat kept a sharp eye on intelligence assessing the chances of a bailout of the Greek central bank is not a problem. However, sharing such sensitive information with friends and family would have been highly improper. Federal regulations prohibit the use of nonpublic information to further private interests or the interests of others. The mere perception of a conflict of interest is unacceptable. - Fox News

If there has been a more corrupt first family in the history of the United States government, anyone would be hard pressed to present their case.  In fact, the scope of Hillary Clinton’s crimes and conflicts of interest spread out over similar ones done by multiple presidents, such as as paralleling her email deletions to Richard Nixon’s deleted recordings, and using her office and foundation to facilitate financial scams like Lyndon Baines Johnson was on the verge of being indicted for just prior to JFK’s assassination.

Since 1963, there may have been only two Presidents elected to office who did not use their position as the leader of the free world to enrich themselves, or to facilitate halting indictments for crimes committed prior to and during their achieving the office of the Presidency.  And in this election come November, the American people could be providing an opportunity for the most corrupt woman and family in the history of this country to seize ultimate power, and seize the ultimate chance to take greed and crime to levels never before seen in our lifetimes.