Over the weekend, Europe’s most toxic and insolvent bank (Deutsche Bank) came out with an announcement that if the European Central Bank (ECB) didn’t come up with $150 billion or more in new funding to bailout the continent’s banking system, then it could potentially face an ‘accident’ similar to 2008’s ‘Lehman moment’.

And it is not the largest German bank that is the sole institution in need of recapitalization by the ECB.  In Italy, nearly all the major banks are on the cusp of insolvency, and appear now in the process of a government sponsored bailout coupled with a small customer bail-in.  Added to this, British banks are running into major problems over their bursting housing bubble, and while the UK no longer has the security of going to the ECB for emergency lending, they may receive it anyway since other EU banks hold long derivative positions on the island nation’s securities and could implode if Britain goes the way of default.

Recall last Thursday, when speaking at a joint news conference with Swedish Prime Minister Stefan Lofven, Matteo Renzi said other European banks had much bigger problems than their Italian counterparts.

“If this non-performing loan problem is worth one, the question of derivatives at other banks, at big banks, is worth one hundred. This is the ratio: one to one hundred,” Renzi said.

He was, of course, referring to the tens of trillions of derivatives on Deutsche Bank’s books.

Today, we got the most definitive confirmation yet that the noose is tightening not only around Italy, but Germany itself (where as we reported on Thursday, Europe’s Bank Crisis Arrives In Germany as €29 Billion Bremen Landesbank On The Verge Of Failure) when none other than David Folkerts-Landau, the chief economist of Deutsche Bank, has called for a multi-billion dollar bailout for European banks.

Speaking to Germany’s Welt am Sonntag, the economist said European institutions should get fresh capital for a recapitalization following a similar bailout in the US. What he didn’t say is that the US bailout took place nearly a decade ago, in the meantime Europe’s financial sector was supposed to be fixed courtesy of “prudent” fiscal and monetary policy. It wasn’t.

As Landau says the US helped its banks with $475 billion dollars, and such a program is now needed in Europe, especially for Italian banks. In other words, just because the US did it, now it’s Europe’s turn to ask for more of the same.

“In Europe, the bailout does not need to be so large. A €150 billion program should be enough to help European banks recapitalize,” said David Folkerts-Landau. He adds that the decline in bank stocks is only the symptom of a much larger problem, namely a fatal combination of low growth, high debt and a “dangerous” deflation.

“Europe is seriously ill and needs to address very quickly the existing problems, or face an accident,” said the chief economist. - Zerohedge

Three days ago, hedge fund manager Jeffrey Gundlach announced that if Deutsche Bank’s stock price fell into single digits, there would be a global panic by investors and that ‘someone is going to have to do something’.  And that someone would either be the Fed or the ECB, and bring about an interesting paradox since the European Commission last year forced all EU nations to sign agreements ensuring they would no longer be allowed to implement sovereign bailouts. 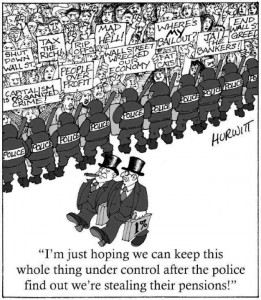 We are no longer waiting until September or October to see a global financial meltdown like we did in previous years, and in the eyes of many analysts, the crisis is upon us now.  And as sovereign bond debt continues to escalate into more and more trillions having negative yields, there is little left for the central banks to do but to fire off a money printing nuclear option, which will then set the global economy on a course of complete collapse.