In the 1920’s, the combination of Germany’s defeat in World War I, and the impressed war reparations put upon them by the allied leaders, led the European power to enter a phase of hyper-inflation the world had rarely seen up until that time.  And the economic devastation was so great, it not only led to the rise of a brutal dictator, but is also used today as an adjective to describe monetary systems that decline into a currency collapse.

But following World War II and the creation of a new global monetary system based on the dollar, central banks in the West were supposed to have the tools to never allow a Weimar event to ever occur again.  But perhaps in the most ironic of circumstances, one European nation stands on the cusp of a return to Weimar like hyper-inflation, with one of the main culprits pushing them over the precipice being Germany.

In June, Greek banks declared a surprise limitation on how much could be withdrawn from an account. At present, the government still limits the cash withdrawals of Greeks.

And, of course, this is just the most recent in a series of events that make up the cash squeeze. In response, Greeks have done what all people do when they cannot get enough currency - they improvise.

Several alternate systems for payment of goods and services have cropped up in Greece since 2010. One is TEM, which allows people to gain monetary credit on an internet site, which may then be used to pay others. Another system is the Athens Time Bank, which logs time units, allowing individuals to pay each other with their time. The services provided can be anything from language lessons to medical consultation. Other systems are popping up, as Greeks seek out any method of payment other than the euro, since they’re closed off from their own savings at the banks. As can be expected, barter is becoming more commonplace.

Greece is right where Weimar Germany was in late 1922. The 1919 Treaty of Versailles required Germany to pay reparations for WWI. At the time, Germany, having lost the war, was already on the ropes economically. The conditions of the treaty amounted to an unpayable level of debt. As it became apparent that it was impossible to pay, the allies squeezed harder. Economic conditions in Germany worsened dramatically, not unlike Greece today, and for the same reason. - International Man

When the Syriza party took over leadership in Greece a couple of years ago, it was expected that the combination of Alexis Tsipris and Finance Minister Yanis Varoufakis would demand from the ECB and their other creditors a haircut of their odious debts, and the ability to stabilize their economy where they could afford to pay off what would remain, and rebuild a system that had experienced six years of austerity and decline.  However, it was Germany’s Finance Minister Wolfgang Schäuble who refused to discuss viable options in good faith, and in the end Greece was forced into even greater austerity that is now culminating in an economy that has little cash, and growing unrest. 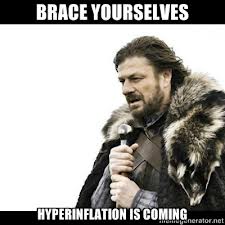 Certain members of the European Union have chosen sides, and these more sound nations are no longer standing with their Southern European neighbors to act in concert with the best policies for the Union as a whole.  And what is now occurring is a political movement, not unlike what brought about the rise of Mussolini, Adolph Hitler, and Fransisco Franco, in nations such as Portugal, Spain, Italy, and even France, that almost mirror the fascist movements that occurred in the aftermath of the Weimar Republic’s collapse more than 90 years ago.

WELFARE is Highest-Paying Entry Level Job in All but Fifteen States … Wait Until You See How Much of YOUR MONEY These Bums Get!!

WATCH TIM ALLEN Give The ‘NANNY STATE’ & ‘KING OBAMA’ a PIECE OF HIS MIND on PRIMETIME TV!!

This SCHOOL DISTRICT Is Now ARMING TEACHERS & EVEN PROVIDING THE GUNS!!