ELDER PATRIOT - Perhaps the biggest con ever pulled on the American people came during the financial meltdown of late 2007 and early 2008.  Behind the constant drumbeat of “too big to fail” repeated by every political and financial “expert,” the mainstream media offered no discussion of other possible solutions.  Absent dissenting discussion, Congress and the President began fleecing American taxpayers to bail out companies that had played fast and loose with the economic system.

This represented a convergence of government with large corporations that may have completed the largest step yet towards the New World Order. 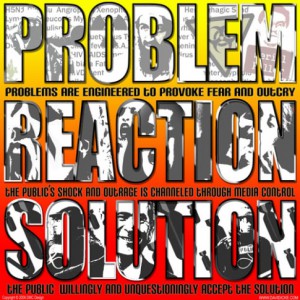 Even accepting that a complete economic collapse was imminent, and that the drastic measure of so seriously indebting future generations was necessary, common sense would’ve dictated another solution.  Instead of rewarding the mega-corporations that had bankrupted themselves and brought our economy to the precipice, the money could’ve been appropriated to those companies within the same industries that had handled their financial affairs properly.   Almost without exception, these were significantly smaller businesses.  In this manner, better-managed and smaller businesses could’ve emerged guaranteeing greater economic diversity with greater decentralization of the control of money.  This would have mitigated the impact of future economic calamities of this magnitude.

Instead, what followed proved the nefarious intentions of the corporate-government ruling Elite.

Progressives, holding control of both Houses of Congress and the Presidency, seized the opportunity presented by the crisis to pass the Dodd-Frank Wall Street Reform and Consumer Protection Act.  One of the provisions of the legislation memorialized “too big to fail,” guaranteeing the bailout of future large corporations that may fail and centralizing economic power in a much smaller group of companies.

It’s interesting that the same Progressives who never pass on an opportunity to bash big business at every political turn not only rushed to guarantee its long-term viability but to centralize that power in fewer companies.  Warning bells should’ve gone off to intelligent observers.

There could be only two explanations for such action by Progressives and both suggest a future loss of sovereignty for American and Americans is the reason:

1.      The “Conspiracy Theorists” who claim the world is run by bankers are correct.  The bailouts, coupled with subsequent legislation were simply tools put in place by their elected puppets in Washington.
2.      Progressives of both parties recognize any potential takeover of the economy by the government would be made far easier, and more acceptable to voters, when a greater percentage of economic vitality is concentrated among a few mega-corporations.

In either instance, the people are now poorer, the mega banks corporations are now stronger and richer, and financial power is now more centralized than ever.  With Americans becoming increasingly dependent on government for the simple necessities of life, they are also growing increasingly accepting of vesting more power in a centralized system that will continue to feed their needs.

About Elder Patriot 119 Articles
Elder Patriot has a bachelor degree in political science and an MBA. He has worked in management for major corporations and as an entrepreneur. He has sat on boards as both a director and as a trustee. His interaction with media members, senators and representatives has been significant and form the basis for his writings and his beliefs.
Loading Facebook Comments ...