We have talked about in the past a paper published by a Harvard professor which argued that a ban on cash would be beneficial to helping the central bank perform monetary policies that give them much more latitude in the economic and financial arenas.  Of course, this ‘educator’ failed to recognize that it is not the fault of money that was ever the issue, but rather that fallible bankers, who are more ideologues than economists, have no idea about what they are doing and that the real answer lies in getting rid of them, rather than restricting the freedoms of the people to own cash.

But sadly this growing trend in both the academic and financial circles appears to be increasing as last weekend the Financial Times suddenly got on the End Cash bandwagon, and is even referring to fiat physical money as a barbarous relic.

The fact that people treat cash as the go-to safe asset when banks are teetering is heavy with historical irony. Paper money was once the symbol of monetary irresponsibility. But even as individuals have taken recent crises as reasons to stock up on banknotes, authorities would do well to consider the arguments for phasing out their use as another “barbarous relic”, the moniker Keynes gave to gold.

Already, by far the largest amount of money exists and is transacted in electronic form — as bank deposits and central bank reserves. But even a little physical currency can cause a lot of distortion to the economic system.

The existence of cash — a bearer instrument with a zero interest rate — limits central banks’ ability to stimulate a depressed economy. The worry is that people will change their deposits for cash if a central bank moves rates into negative territory. The Swiss, Danish and Swedish central banks have pushed rates lower than many thought possible; but most policymakers still believe in an “effective” lower band not far below zero. - Financial Times

Neither gold nor fiat paper money has ever been the problem in any monetary system.  It has always been the men and women who in their arrogance, agenda, or greed have corrupted finance to the point where what a nation has designated as money is no longer of value.  From Roman times where the clipping of coins led to inflation and monetary devaluation, to the 1960’s in America where the government pressured the central bank to increase the money supply so they could embark on wars that went well beyond their ability to pay for them, it has always been bad choices made by those in power who have destroyed the foundations of any monetary unit, and subsequently changed monetary foundations (removing gold from backing the dollar) to accommodate their actions. 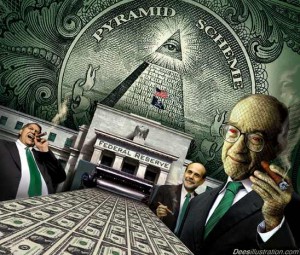 The Fed made multiple mistakes going back to the 1990’s which have only escalated the death of the dollar, and the bringing of the global financial system to the point of collapse.  And now, instead of recognizing the error of their ways in keeping interest rates too low for too long, and not allowing bad debt and insolvent institutions to simply fail as in the past, they want to blame cash as the evil that is keeping them from fixing a problem of their own making, and punish those who trusted in their judgments by taking away the freedom that comes from holding money in your own hands.

Senate Republicans Are Marching Us Headlong Into The New World Order