ELDER PATRIOT - Doubling down on failed policies is stupid.  That doesn’t stop Progressives who are so ideologically driven to do “something,” even when that “something” represents jumping from the frying pan into the fire.

The Bureau of Labor Statistics (BLS) has compiled statistics that portray the result of government programs “meant to help.”  They don’t paint a pretty picture.

Real unemployment among non-government workers is over 47%.  Adding government employees into the statistics only drops real unemployment to just below 42%.  It’s actually worse than that because people holding two, or more, jobs are counted multiple times. 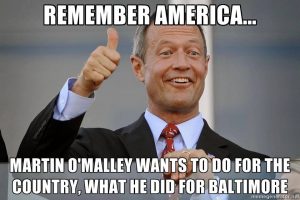 Government is Baltimore’s largest employer by a margin exceeding 2-1.  With one government employee for every 10 residents, one is left to wonder why Baltimore’s residents require such personalized care.  The answer is they don’t.  This ratio rivals the guard-to-prisoner ratio of max security prisons.  This is government largesse carried to the extreme.

Such a lack of productivity should be intolerable to Baltimore residents who are footing much of the bill.  It’s unlikely to change anything come election time, though.

With 56,662 government workers certain to vote in their own interests, they are likely to comprise 25% to over 30% of the turnout on the day of the election.  Counting family members that percentage can skyrocket.

The most optimistic of turnout numbers would require any conservative reformer to garner in excess of 67% of the remaining votes.  That’s highly unlikely since blacks comprise 63.7% of the population of Baltimore and they historically vote over 90% Democrat.  Even if only 10% of the black community turned out for the election any reformer would probably be forced to gain 75% of the remaining vote.  With only 42% of the electorate registered other than Democrat the odds are long against that happening.

Like those who make a deal with the devil, this is the trap people become ensnared in when they seek the help of government.  Progressive Democrats are now excited about making Martin O’Malley their presidential candidate.  For a movement that has proven tone deaf to the needs of the common working man, this speaks volumes.

O’Malley’s importance in bringing Baltimore to this point as mayor and governor over the past 16 years is inescapable.  His promotion can only mean that Democrat leadership doesn’t care to fix the problems.  The perpetuation of their power by an ignorant and increasingly dependent constituency seems to be all that concerns them.