While not coming out fully with a solid endorsement, famed economist Marc Faber stated on March 18 that given the choice between Donald Trump and Hillary Clinton, he would choose The Donald because Trump may potentially hurt the U.S. economy, but Hillary would destroy the entire world.

Faber’s comments came during and interview Friday on Bloomberg TV, where he gave several accolades for Donald Trump, but nothing good for his potential opponent Hillary Clinton.  And in citing the real differences between the two Presidential front runners, Faber cited Trump’s history of economic success around the world while stating that Clinton has only to look at the Middle East while she was Secretary of State to show what a world under her would come to look like.

You can buy the Singapore stock market with a four percent dividend yield. Well, Singapore is a relatively sound economy.  It’s diversified and it’s well run, unlike the U.S., unless, of course, the U.S. is run by Mr. Trump.  Then the U.S. will improve.

HYDE:  But Mr. Faber, I mean, we’re seeing from Donald Trump’s potential policies that he wants to slow international trade between the United States and other countries.  Surely that’s going to be a block upon free markets.

FABER:  Well, I agree that it is negative if you have restrictions on a free market.  That, I agree entirely.  But you have to equally see that the U.S. has essentially given in on a lot of things that benefit other countries.  If you look at, say, the growth, 2000 to today, which countries have done relatively well?  The emerging markets have done fantastically well.  Their GDP has gone up substantially.  The standards of living have gone up substantially.  They have accumulated large reserves, and so forth.  The U.S. and Europe and Japan, relatively speaking, have been declining, and that, the statistics are visible from industrial production in emerging economies.  It’s doubled in the last 12 years.  Global trade, you look at the share of emerging markets, it’s gone up.  The developed world, the U.S., Europe, Japan, it’s gone down and so forth.  So I think that maybe we have to find a way to have a more balanced approach to global trade.  I’m not saying protectionism, but the more balanced approach that is fair to the developed world.

BARTON:  Are you really a fan of Mr. Trump, Marc?  Do you really believe…?

FABER:  It is all relative.  Given the alternatives, I would vote for Mr. Trump, because he may only destroy the U.S. economy, but Hillary Clinton will destroy the whole world. Look at her nation building in the Middle East, how successful that has been.  Zerohedge

Many of Donald Trump’s adversaries cite his rhetoric on massive tariffs as being a death knell for trade and the U.S. economy, but none of these pundits ever cite the fact that we already have a trade deficit of over half a trillion dollars because of America’s post-Nafta policy of ‘free trade’, or that many of the companies making money off the American people are U.S. based corporations who sell their goods to the U.S. from foreign based producers.  And all one has to do is look at Apple who is headquartered in California, but has over $175 billion offshore from selling goods from China and keeping their money outside the country. 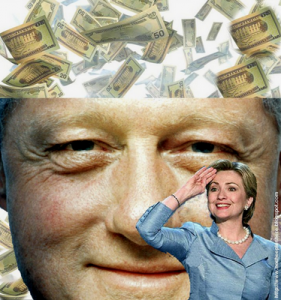 With over $2 trillion in cash held offshore, and accumulated by U.S. based multi-national companies producing their goods in foreign countries and then selling them to the same Americans they laid off when they moved to China, Mexico, and India, any tariffs that Trump may enact should he become President would be like a tax against companies that spited Americans for a free buck, and who have helped facilitate the expansion of the national debt by forcing more people onto the welfare roles.

And while Trump may be a phenomenon that both the American people and the establishment can’t get any labels to stick to him, Hillary’s past is well known and open for everyone to see, and perhaps is the underlying reason why Dr. Marc Faber would choose the relatively unknown over the well known for President in 2016.

As the Fed jawbones recovery and normalizing interest rates, debt defaults at highest levels since December

Even Rothschild is admitting the economy is in distress

Welfare to the world: Illegals receive more in benefits than U.S. citizens do