PAT BATEMAN - President Trump has finally had enough of the Democrat’s and establishment Republican’s witch hunts and has decided to expose Hillary Clinton for who she really is. Trump laid out her crimes against justice and called Muller’s probe via the special counsel as “the single greatest WITCH HUNT in American political history – led by some very conflicted people!” 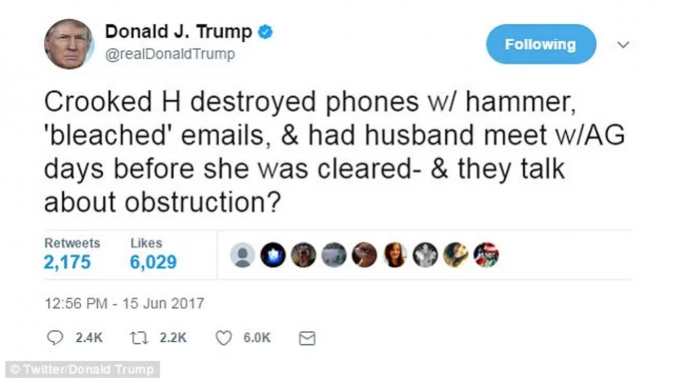 The President took aim at Hillary during his Thursday afternoon Twitter assault. After months of silence on the core reason he was elected, the promise to hold Hillary and other corrupt elements of our government accountable, Trump fired on the treasonous war criminal with both barrels saying “Crooked H destroyed phones w/ hammer, ‘bleached’ emails, & had husband meet w/AG days before she was cleared- & they talk about obstruction?”

The fact that this is undisputed veritas, that Clinton and her team ILLEGALLY DESTROYED EVIDENCE and faced no consequences is a great illustration of just how dead the rule of law is in this once great nation.

When Obama’s White House was asked about Hillary illegally destroying evidence here is how they lied .. err … ‘reacted.’

As hundreds of millions of Americans wondered, Trump actually asked the world “Why is that Hillary Clintons family and Dems dealings with Russia are not looked at, but my non-dealings are?”

Please take a moment to share this article.  Facebook has launched an all out assault on the alternative media, doing everything they can to censor us and sites like ours.  We must not let the communists on the left, lead by those in the Democratic Party and on the internet by Facebook kill the 1st Amendment.  Will you do your part in defending your political speech?