ELDER PATRIOT - Last night in Costa Mesa, California an estimated 31,000 supporters of Donald Trump showed up for a rally. But, it was the hundreds of agitators who decided to break the law that illustrated the stark difference between Trump’s peaceful political movement and those who seek to influence the process through intimidation and lawlessness.

The only cogent words these provocateurs said were, “F*ck Donald Trump,” occasionally forgetting to insert his first name.

When asked the reason for their hatred of Trump they turned away apparently unable to engage in the most basic of democratic functions, debate.

One miscreant kept claiming that they were protesting but what they were doing was breaking the law. Protestors have every right to make their point in a peaceful manner without trampling on the rights of others. This was not the case with them.

They willfully damaged cars, held up traffic and incited confrontations with those they identified as Trump supporters. At least one Trump supporter was beaten and bloodied by numerous agitators because he attempted to reclaim his backpack that had been stolen by a female in the mob. To these degenerates protesting includes throwing someone who disagrees with them to the ground while multiple people stomp and kick him. 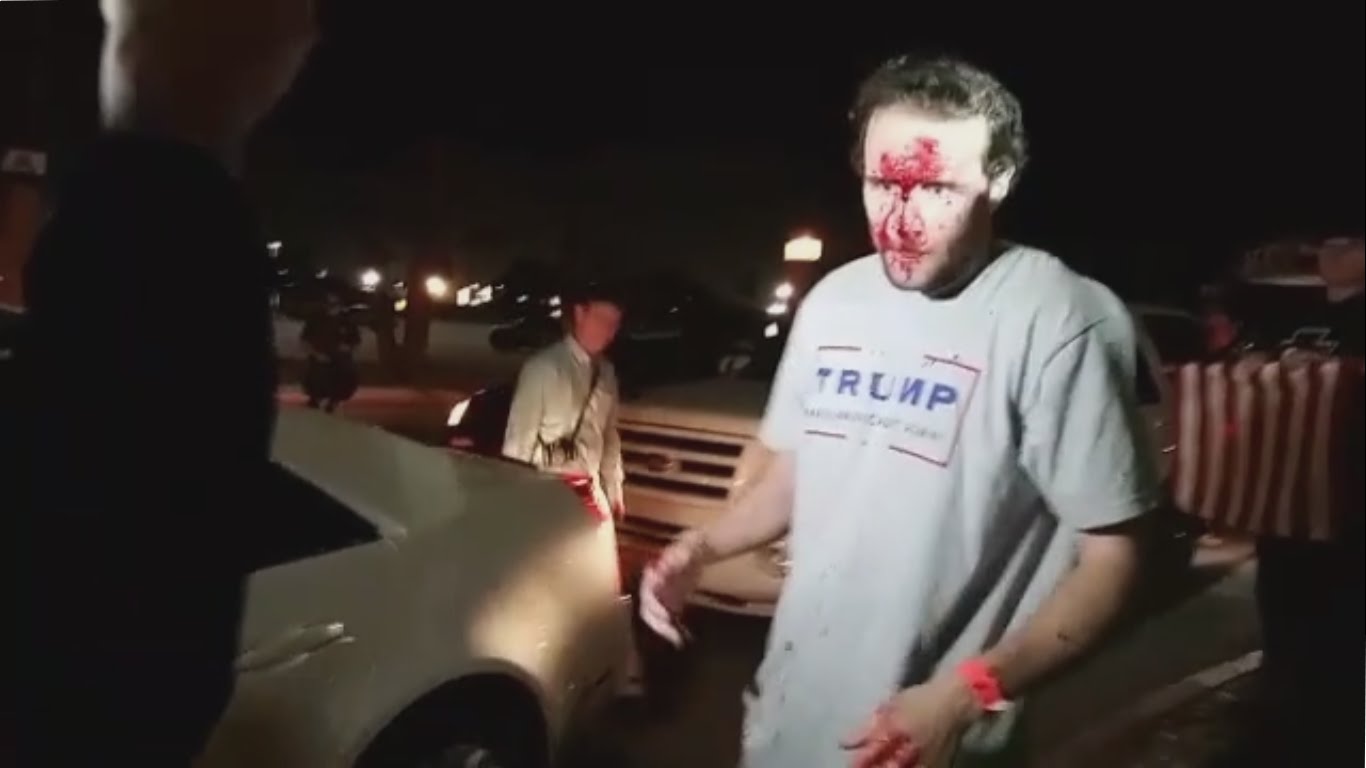 The mainstream media won’t report this though it stands in stark contrast to Michelle Fields’ claims against Corey Lewandowski that they droned on relentlessly over.

Had the Trump supporters held the same hostility towards the agitators that was displayed against them, and had they employed the same lack of restraint the agitators would’ve been overrun in minutes. Instead, Trump’s supporters either ignored them or tried to engage them in debate but were met with slurs in Spanish that became chants, and the one word of English they know followed by Trump’s name.

You can decide which group embraced the democratic principle of winning arguments through debate and which side sought to employ third world tactics of intimidation.

The anarchy that took place last night was organized and funded by supporters of Hillary Clinton who are panicking over the lack of enthusiasm behind her campaign and that has been evidenced by the diminished turnout for the Democratic primaries. This was an attempt to energize the base so that they might be more inclined to vote for the scandal-marred candidate in November.

These are the people that the American Left and the Democrats now consider the basis of their movement. Black Lives Matter, La Raza, eco-terrorists, the list of groups that seeks to coalesce power through intimidation continues to grow with the financial support of Democrats. For these group debate is intolerable, only the call to silence those who see things differently than they do.

Those who cherish our freedoms, and the democratic system that makes it possible to preserve them, should think long and hard about ceding any further level of control to those who seek to empower such movements lest there be no turning back. Just ask the people of Cuba.