The Mexican invasion of the United States was demonstrated beyond question by the events in California over the past 48 hours.  The invaders had been content to surreptitiously continue growing their hold over our political system until Donald Trump ascended to the top of the political hierarchy by demanding enforcement of the laws protecting our borders.

Now, the invaders from the south have planted their flags and defiantly declared the land as their own.  Any argument to the contrary was put to rest when they sent a small boy forward declaring their intentions to reclaim our country for Mexico.

While most Americans will dismiss the sign-holding boy as nothing more than an innocent child bearing an innocuous message they should ask themselves what the reaction would have been had a blond-haired blue-eyed girl of similar age been sent forward with a sign that said “Get Off Our Land.”  Comparisons to the Nazis would’ve followed her for the rest of her life.

The significance of this should not be dismissed.  President Obama was in England this past week assailing the nation-state as having diminished importance in today’s world, all but declaring sovereignty dead.  Here, at home, he has steadfastly refused to enforce the laws protecting our borders, released violent criminals into our midst who are here illegally, and invited millions more to enter our country with impunity to commit crimes.

While attempting to weaken our nation’s internal resolve, he has also spent the past seven years dismantling our military whose job it is to defend America’s sovereignty, having cut defense spending by $400 billions dollars with the promise to double that before he leaves office.

The president has done everything within his power to demoralize the members of our military by turning it into a social experiment, from forcing male ROTC cadets to walk in high heels, to force-placing women in frontline combat leadership positions, to encouraging openly gay behavior. What would Obama’s reaction had been if captured Islamic terrorists had been made to walk in high heels by our command in the Middle East?  If President Obama is so intent on proving that women are equal to men in defending themselves and others why hasn’t he demanded to have even a single woman among the Secret Service agents who he relies on to keep him safe? 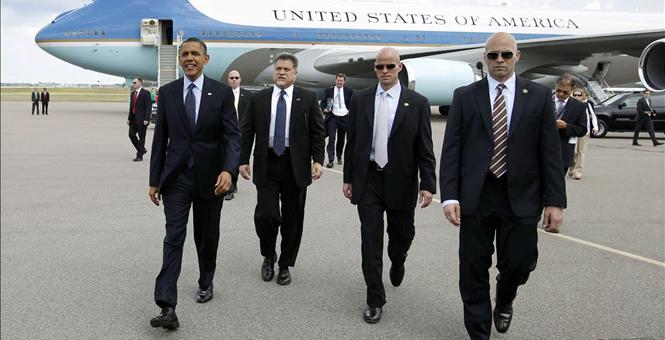 Just as concerning has been the Gestapo-like militarization of our local police forces as well as the TSA, turning them into forces that can be used against the American people.  It was reported that TSA agents were present at Donald Trump’s rallies and appearances in California.  It’s not clear whose interests they were there to defend.

The cute child holding the sign carried a message that should serve as a very loud warning for those Americans who still love their country.